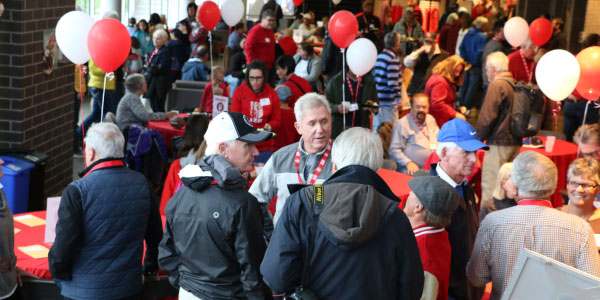 When you include Regis Jesuit High School in your will or estate plan, you become a member of the St. John Francis Regis Legacy Society and help ensure the long-term viability of the school.

You may be looking for a way to make a significant gift to help further the mission of Regis Jesuit High School. A bequest is a gift made through your will or trust. It is one of the most popular and flexible ways that you can assist in the growth of our endowment, ensuring a Catholic, Jesuit education remains accessible and affordable to all qualified students. 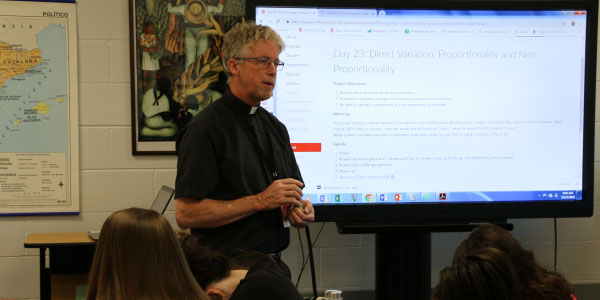 An IRA rollover allows people age 70½ and older to reduce their taxable income by making a gift directly from their IRA.

An IRA rollover allows people age 70½ and older to reduce their taxable income by making a gift directly from their IRA.

You are at: Planned Giving > Gift Options > Donor Stories 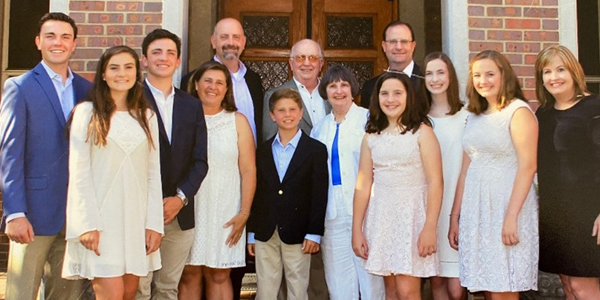 Don Cunningham remembers his time vividly at Regis Jesuit in the class of 1957. One of his favorite math teachers, Father Krieger, SJ, inspired Don so much that Don could not wait to get home from his sports to work on his homework. Father Krieger not only taught Algebra, but he also taught Don and his classmates how to learn and how to solve problems. Another favorite professor was Don's English teacher, Father Deeman, SJ, who was very proficient at teaching the proper use of the English language. Don and his classmate, Bob Girardo '57, were chosen for the senior year comprehensive syntax test. Both Don and Bob received a 100% score. To this day, Don uses this knowledge to help others learn the correct conjunctions, prepositions, and grammar.

Sally and Don have four grandchildren who have attended Regis Jesuit—Connor '17, Ryne '18, Shannon '20 and Sean in the class of 2025. It is their delight to watch their grandchildren play as athletes for Regis Jesuit. When asked why they have left Regis Jesuit in their will, Don shared "because the Jesuits always take care of students who cannot afford a Regis Jesuit education and do this all for the greater glory of God. AMDG!" 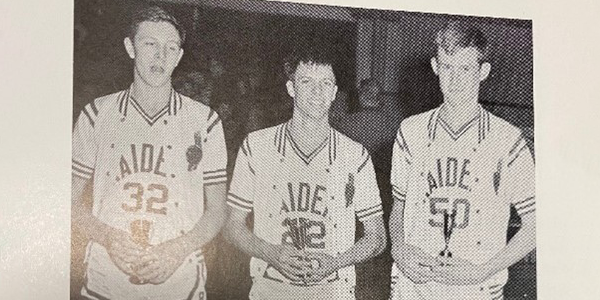 Frank Kelly '67 (pictured on the far right) was awarded "All Tournament Player" on the 1967 Regis Jesuit Raider basketball team that captured the Denver Catholic High School Basketball Tournament in the Parochial League. Regis Jesuit was undefeated in their league play that year with an 18-0 season. Frank, a retired teacher and basketball coach, attributes his career choice and personal success to RJ basketball coach and teacher, Guy Gibbs '47. According to Frank, "Guy Gibbs put me on the right track. He had faith and confidence in me. He could have cut me from the team at different points, but he did not. Due to my outstanding play senior year, Guy made a call to Colorado State University to allow me to become a preferred walk on. With this phone call, he provided me a good path." Frank went on to play basketball for two years for CSU and then graduated from CSU and taught at Hinkley High School 26 years where he also coached basketball. Frank designated Regis Jesuit in his will in honor of Guy Gibbs '47 and in gratitude for Guy's mentorship. Frank is a dedicated basketball fan and still cheers on the Regis Jesuit Raiders when he has the chance. 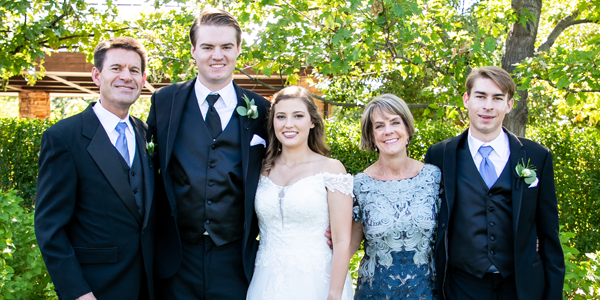 "Regis Jesuit fit our family's intentional choice for Catholic education. We chose an environment that would honor our faith and God, building up our sons spiritually and academically. Their experience at Regis Jesuit was profound and positive, preparing them to live as Men with and for Others. Supporting Regis became an important decision in our estate planning with hopes of allowing that same experience for others." 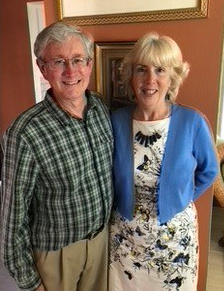 I applied to Regis Jesuit after completing 31 years of teaching in the Cherry Creek Public School District. My husband had been diagnosed with prostate cancer the year before, and I had resigned as science department coordinator. I wanted to achieve a better work/life balance and was ready to focus my passion on teaching students. When Alan Carruthers, the principal of the Boys Division at the time, hired me, I made a five-year teaching commitment to RJ and ended up staying for six years.

I spent considerable time the summer before I started to make sure the transition to a new school and chemistry program would go well. As with any new position, the learning curve is steep, but my colleagues at Regis Jesuit were welcoming. Since I taught chemistry, I always worked with bright and capable students. My colleagues in the public school were fantastic. However, the spiritual renewal and returning to my Catholic roots made Regis Jesuit a wonderful place to finish my teaching career. I was able to refocus on my relationship with Jesus. I freely shared my Catholic faith experience with my students, and they shared their retreat experiences and faith journey with me. Last year, I celebrated the people who ignited and inspired me with my chemistry students. These included my uncle, Father Finian McGinn OFM, Ermias Aria '17, Servant of God, Julia Greely, and Saint Mother Teresa. At Regis Jesuit, I taught students more than chemistry, although I had high expectations for students as scholars.

My Regis Jesuit experience has helped guide my future. The Steele Center opened the year before I started teaching at RJ. One of my Holy Family High School classmates, Nancy Zoellner, and her husband Mike '74, made a very generous donation to support this endeavor. Their generosity inspired me. As a retired public-school teacher, I decided to name Regis Jesuit as the beneficiary of the retirement funds I earned while I taught at RJ. I believe the salary I earned allowed me to give back to the institution that has given me much. 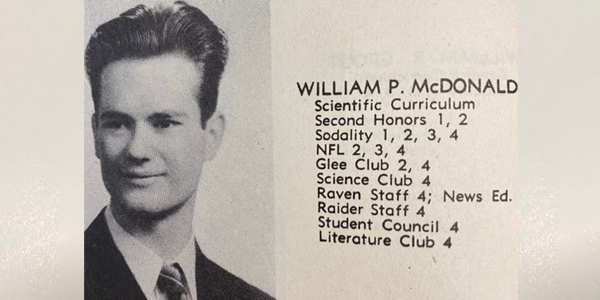 "I was the only grandson in my family and my grandfather really wanted me to have a Regis Jesuit education. He paid for my RJ education ($100 in 1941) each year. In high school when I had an appendicitis, several of Jesuits from the Regis Jesuit community came to visit me. I appreciated the Jesuits and how they taught me how to study which helped me in college, the army and in my chemical engineering career. Fr. Krieger was a favorite teacher who was a disciplinarian, but also a topnotch teacher with a kind heart. Regis Jesuit is in my will in honor of the wonderful value-based education I received and to provide for future Regis Jesuit students." 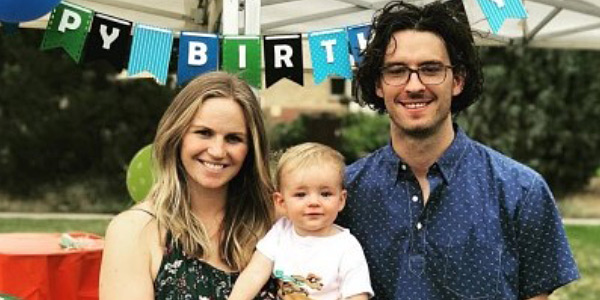 "When trying to decide the best way to support Regis Jesuit, Abbey and I felt that on top of an annual contribution, leaving a legacy allowed us the satisfaction of making a significant gift now for a modest cost. What an awesome feeling knowing that we've created an everlasting bond with a place and community that we care so deeply about." -Paul '04 & Abbey Miller, SJFR Legacy Society Members 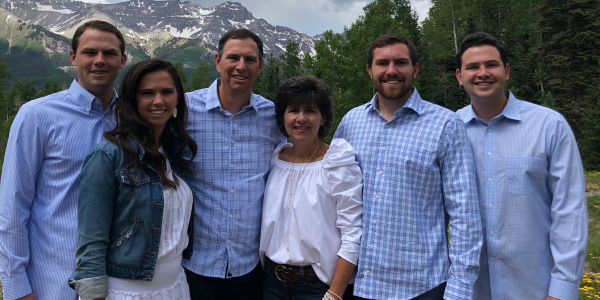 "Sending our four children to Regis Jesuit was our way of communicating to them that God and faith are foundational to everything we do. Their four years at Regis laid the foundation for who they are today, and they are better people because of their Regis Jesuit experience. Leaving Regis Jesuit in our will is one way we can say thanks, and hopefully make the same opportunity available to others in the future. AMDG." -Steve & Marnie Bell, SJFR Legacy Society Members, Parents of Lauren '09, Andrew '11, Michael '13 & Peter '15